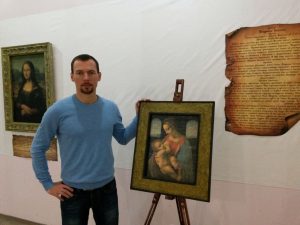 Artist,
wrote the film “1704”, Sergey Kurylenko.
He was born around 1985 the city Hot Key, in the Krasnodar region.
From childhood he was interested in art, and a lot of free time he spent for the drawing. simultaneously with
school, he attended the city school of arts, where he graduated with
honors. At that time, there was an interesting case: the local landscape painted Psekups for competition within the school, was placed in the lobby of the building. But a few days later he was brutally extracted from the frame, which has been issued and stolen unknown.
The teacher initially thought Sergei, who could take a picture home, but in fact, the work was stolen by an unknown man.
After high school, Sergei studied at the Lyceum,
at the State University of Culture and Arts, and then enrolled in his faculty of Industrial Art Academy.
After graduation, Sergei became a member of the Professional Union of Artists of Russia. Several of his works are in different cities of Russia, one in Ukraine and one in Germany. Everything changed in the spring of 2012 One night he had a dream where he writes painting, mixed media, hard-to-read picture lines. Sergei did not attach any importance to this dream.
After a while, the dream became a repeated one and the same, where the artist paints a picture, it is called “1704” – four numbers, what they mean – he does not know. The artist realized that these dreams and difficult to follow the instructions. Sergey repeating the same thing, that already did in my dreams, became remarkably similar pattern, and gossamer paint lines laid down “if” itself. By the autumn of 2012 the painting was completed. “1704” picture legend, its origin is the most interesting part. The artist is happy that he wrote this work!